The Fairy and Dragon Festival 2018 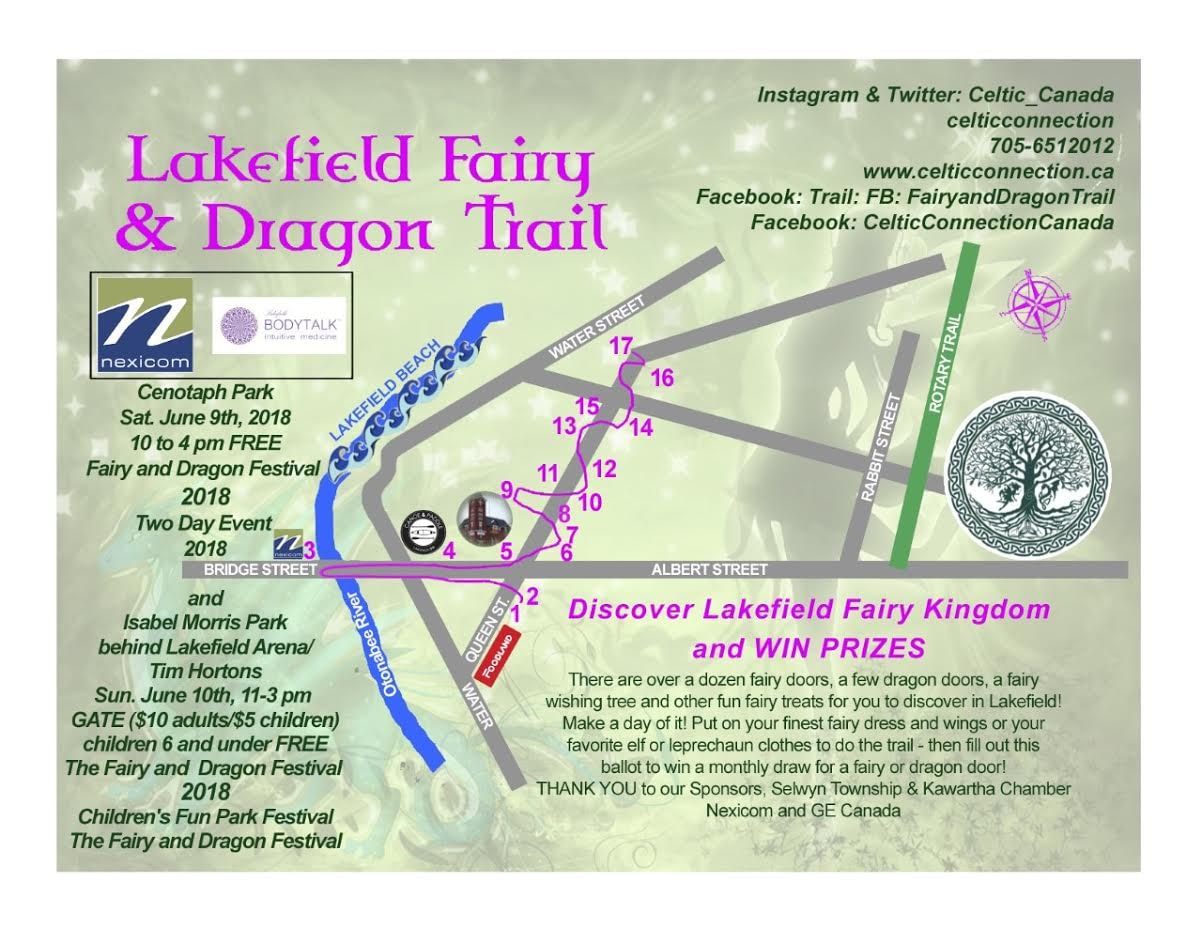 The Fairy and Dragon Festival 2018

All day, all ages, all fun! The Fairy and Dragon Festival (4th annual) is a costume event held the second weekend of June every year. The Saturday, June 9, 2018 is a free costume event at The Cenotaph Park, Lakefield across from Lakefield Foodland from 10 am to 4 pm. This year, Day Two of the Festival will be held at Isabel Morris Park behind the Lakefield Arena/ Timmys from 11 am to 3 pm and costs $10 for adults and $5 for children over six years of age; children under 6 are free. The tickets are to raise money and awareness to pay the festival entertainers. In addition to the amazing Blades of Glory troupe, Sparky the Dragon, Razberry the Clown, and Eden Cairns’ Fairy Princesses and Dragons, on the Sunday event only other entertainers featured will include: John Foreman (who built the Bancroft Outdoor Theatre) doing a broad-axe demonstration and building a bench for the Village of Lakefield; Champion chainsaw carver Steven Kenzora doing a chainsaw demonstration, John Mullin piping the day in, PACA (Peterborough Academy of Circus Arts) final winner of Circus Idol show!
Organizer Mary McGillis of Celtic Connection expects many costumed fairies and dragons: “Costumes are optional, but we have amazing costume prizes and expect a lot of people will dress up. It is intended as a fun weekend for all ages.”

Saturday begins at Cenotaph Park across from Lakefield Foodland at 10 am with entertainment beginning at 11 am with the BladesOfGlory.ca sword fighting knights, who play again at 1 pm and 2:30 pm and introduce the Kawartha Music Co. fairies at 1:30 pm for singing and dancing time. Eden Cairns Princess Parties’ fairy princesses will be here again;  yes, Tinkerbell and friends will lead conga line parades around the park, following each 30 minute sword fight. Sparky the Dragon and Sparky the Firedog will be greeting everyone. There will be a fairy and dragon wishing well created for the festival by local carver Steven Kenzora, Razberry the Clown balloons and celtic storytelling.   Great costume prizes, vendors, facepainting, Lakefield BodyTalk Children’s play area will feature Sandra O’Brien’s Huge Dragon Bubbles and The Fairy & Dragon Collecting Game, which are SO popular! Vendors include: Lakefield Pantry’s dragon and fairy cookie decorating booth, Crom’s Anvil, Wands & Whimsy,  Jodi Hendricks’ Fairy & Dragon Doors and Celtic Connection, Mystical Murdocks and Dragon’s Forge. Festival goers also take to the Fairy & Dragon Trail (featuring over 20 fairy doors, dragon doors and fairy attractions) at locations throughout the Village of Lakefield). To raise money for entertainers for the festival, there will be a draw for a magical fairy garden planter for a spot in your secret garden created by the design team at Griffin’s Greenhouses with a value of $150. Thanks to the family owned and operated Griffin’s Greenhouses near across the road from our costume prize sponsor, Overstock Liquidation!

The Fairy and Dragon Festival
Saturday, June 9, 2018 from 10 am to 4 pm
at the Cenotaph Park, Lakefield, ON (across from Canoe & Paddle and Foodland)
The purpose of the festival is to bring attention to the Celtic culture and a tourist attraction in Lakefield, The Fairy and Dragon Trail: The Lakefield Fairy & Dragon Trail features over 20 fairy doors on the front of buildings and businesses throughout the Village of Lakefield. It is an urban walking trail for walkers of all ages and can be walked any day, all year long!
1. Walkers download free ballots at celticconnection.ca or at the information booth at the festival site;
2. Find 7 of the 20 fairy doors and write their location on the back of the ballot.
3.  Return the filled out ballot to Celtic Connection or the information booth and you are automatically entered into the free draw to win a door!
4. Your name will be put into a monthly draw for a free Fairy Door or a free Dragon Door (of doors in stock at time of draw)! 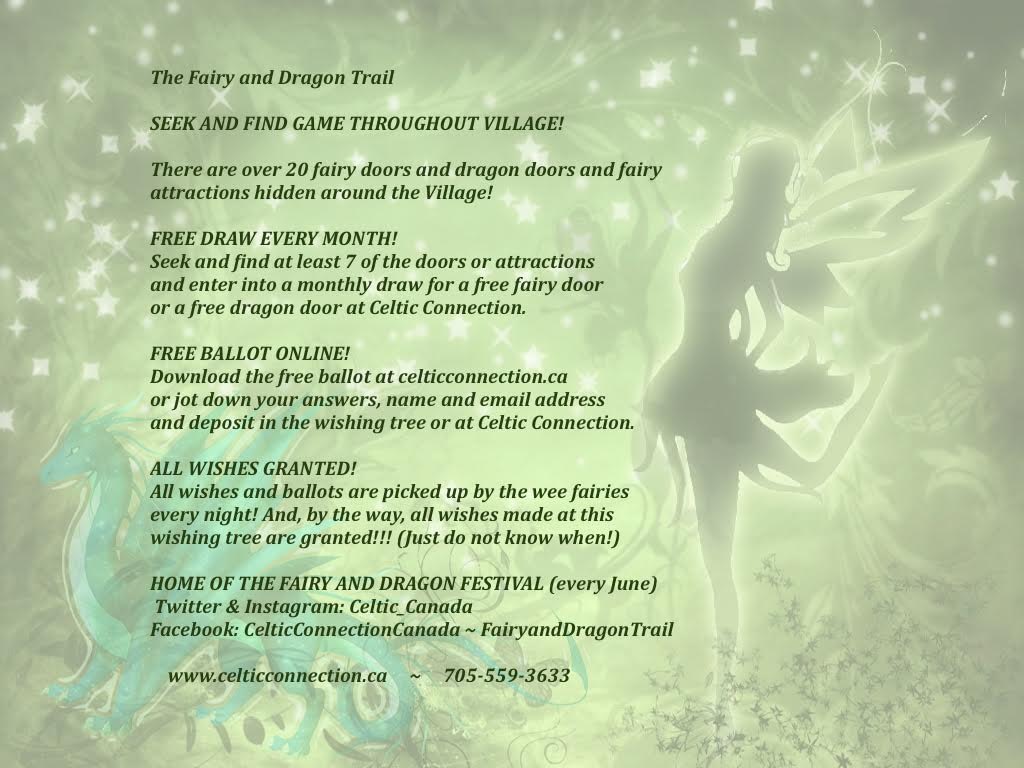 10 am festival vendors, activities and games ready to go!

Entertainers throughout day include:
Sparky the Dragon arriving from Hamilton in morning to stay for the day; and Sparky the Firedog arriving in afternoon!

Sword fights at 11:30 and 1 pm and 2:30 … 20 minute sword fights followed by Princesses/everyone doing conga parade line around park (after each swordfight)

After Kawartha Music Co. Conga lines and then Dancing with Knights & Princesses
2:30 Blades of Glory Arena

Activities:
Walk the Fairy & Dragon Trail through the Village
(Over 20 fairy doors in front of businesses/buildings)
At Festival Site:
The Wishing Tree by Jodi Hendricks