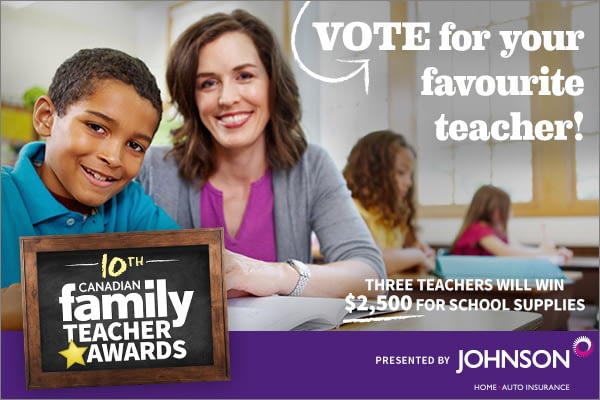 May 17, 2016 (TORONTO) — Canadian Family is pleased to announce that Peterborough, Ontario’sSylvie Copland of St. Catherine Catholic Elementary School has been nominated for a 2016 Canadian Family Teacher Award.

Starting today, 12 educators – shortlisted for their accomplishments in education – will participate in an online vote to determine the top three winning teachers in Canada. The three winners will each be awarded $2,500 for programming and supplies, courtesy of program sponsor Johnson Inc., one of Canada’s leading providers of home and auto insurance.

From a pool of nominations, the judging panel was tasked to define keynote characteristics and skills that they felt separated the top 12 finalists as truly extraordinary. Sylvie Copland is nominated for her selfless and caring nature, through which she treats each student. Her charitable nature also extends beyond the school community, as she is commended for her fundraising initiatives to support children in developing countries. Specifically, Copland has empowered her classroom to sponsor four children in Africa. Further, each Spring her class raises funds to provide mosquito nets to children threatened by malaria.

“The nominations this year were very strong and the selected finalists have each uniquely impacted the lives of those in their classroom and in their communities” said Angie McKaig, Director Digital Lifestyle Brands, St. Joseph Media. “It’s always so exciting to watch the votes come in as communities rally around their favourite teachers.”

In addition to the prize money, this year’s winners will each receive a Scholar’s Choice 20% off gift card, which can be applied to maximize the total spending power of their monetary prize. Each winner will also receive a gift basket valued at $250 from Baskits to share with their class.

Voting is now open at CanadianFamily.ca/TeacherAwards and will close on June 19, 2016. Once votes are tallied, the winners will be officially announced on Canadianfamily.ca on August 15, 2016.