Farquharson Back on the Streets – October 20 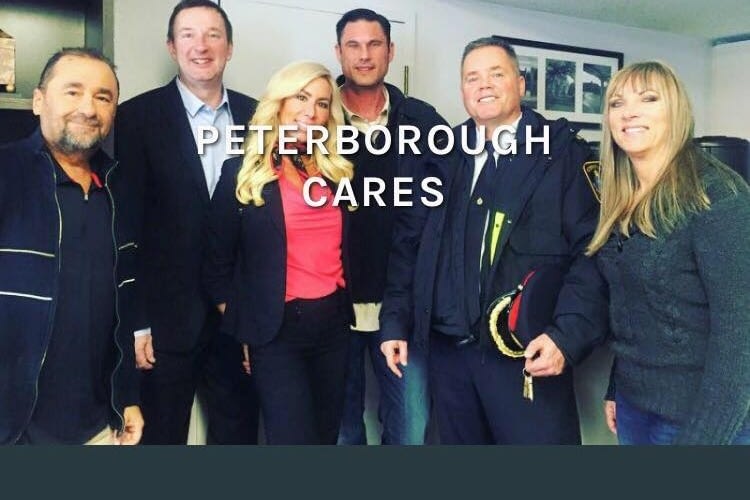 The Countdown is on —
Farquharson Back on the Streets Next Saturday!

If you happened to pass by the corner of King and George on a crisp January day earlier this year, you would have been forgiven for thinking you had come across a really cool street festival. Musicians were playing on a temporary stage set up in the alcove under the awning of the office building at the corner and there was a crowd gathered, mingling, enjoying the vibe, and having fun. Cars were pulling up to check out the action too. All this energy was the backdrop for Stand with Tim, an event that was packing a serious message and tackling a significant issue – homelessness.
This week, on October 20 — less than ten months after the inaugural event — Peterborough’s deputy police chief, Tim “Farqui” Farquharson, will do it again, going back on the ‘street’ for twelve hours to simulate homelessness. From 4 p.m. Saturday to 4 a.m. Sunday morning, Tim will again pull an overnighter, standing at King and George to drive awareness and raise cash for three front line stalwarts — YES Youth and Family Shelter, Brock Mission and The Warming Room. He’ll be looking to build on the more than $10,000 that was raised the first time. And yes, once again, the fundraiser will be accompanied by live entertainment!
“Originally, I thought this would be a one-time event, but the need is still there and our shelters are at capacity. The litmus test of a caring and compassionate community is how we treat our most vulnerable citizens, so here we are again trying to do our part,” Tim said.
Make no mistake, homelessness is preventing Peterborough from moving forward as one community.
“It’s all of our issue. I think it’s important to understand that connectivity — that we are not a healthy community unless we all have homes,” said Christian Harvey, Director at the Warming Room, an agency with a mission to challenge homelessness by breaking down barriers and advocating for systemic change.
The event will again feature a stellar cast of local talent, including Nicholas Campbell, Kim Doolittle, Aaron McMillan, Carla Bonnell, Bobby Watson, Washboard Hank, Bailien, Rye Street, and Bree Taylor. Musicians will rotate in for short sets beginning at 4 p.m. There will also be bins set up for used clothing. If you wish to lend your support, you can donate right at the event or visit the event’s Go Fund Me page.
We asked Farqui what surprised him about the first event.
“I never would have expected donations from people with limited funds, like students, going to and from the bars for an evening out or in another case from a man experiencing homelessness himself. He was collecting money a few blocks away and kept coming back to us to drop it off. I was also surprised by the number of people in Peterborough who live here, but didn’t realize we had this challenge, or didn’t know about our great shelters and who wanted to learn more,” Tim said.
With a vacancy rate of less than 1% in Peterborough, there is clearly a lack of rental housing in the city and a lot of what is available is not affordable for many people. Rooming houses can be unsafe. Openings in supportive housing arrangements funded by partnerships between various levels of government and not-for-profits are at a premium.
“All these issues put a greater strain on shelters, making it difficult for people to move out. And given that shelters are perpetually at — or close to — capacity, we’re really in a crisis,” Christian said.
Fundraisers like Stand with Tim are vital to not just the shelters’ capacity to deliver programs and services, but also to their ongoing viability.
“All of us have to fund raise to exist,” Christian said.
The fundraiser is organized by Peterborough Cares, a community group that works with local not-for-profits and community builders like Farquharson around social issues that affect the city Peterborough.
“I don’t know what the answer is. It’s not one issue, you can’t pin it on just one, everybody has a different story. But I know we can do something about homelessness in Peterborough,” Tim said.
Amen brother.
Author : Darcy Bonner