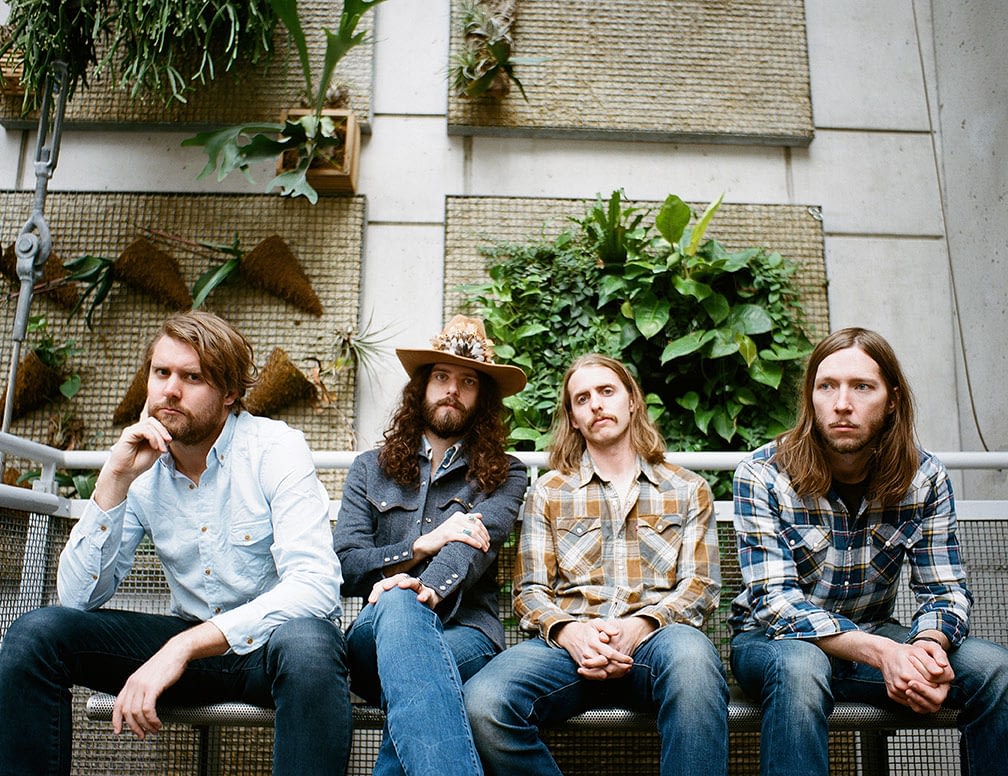 As a young child Ewan Currie was discovered by his worried and frantic mother in a park near their Saskatoon home, he had wandered off and found a furry new friend. Years later the large benevolent canine would inspire the name of Currie’s now famous rock and roll band, The Sheepdogs.

In early 2011 the last miles on that long road to fame took place in a 1995 Dodge 3500 van, as they toured Canada doing small gigs and travelled to Los Angeles to play for a crowd of industrial workers, a stop they were told would yield huge dividends but actually left them in debt. It wasn’t until later that year that an agent they met in Toronto submitted a demo tape for a “Choose The Cover” magazine competition that the Saskatoon band got their big break. The Sheepdogs beat out fifteen other acts to get their faces on the hallowed cover of Rolling Stone magazine, the first unsigned act ever to do so. Following their win, the band signed with Atlantic Records, and recorded a new album which was produced by The Black Keys.

Born in Australia, Currie (lead vocals and guitar) moved to Saskatoon at age 11 where he met Ryan Gullen (bass guitar) and the two became close friends, learning how to play clarinet together and then eventually guitar during high school. The two met Sam Corbett (drums) while attending the University of Saskatchewan and the three decided to form a band. Currie, Gullen, and Corbett called their new outfit The Breaks and released an EP in 2006. That summer the trio spotted Leot Hanson playing acoustic guitar at a party and The Sheepdogs were born.

In April of 2012 they took home three Juno Awards for Rock Album of the Year, Best New Group, and Single of the Year but were unable to attend the ceremony as they were touring in Australia with John Fogerty.

Hanson left the band in July 2014 and was replaced by Winnipeg guitarist Rusty Matyas who contributed to the 2015 18-track album Future Nostalgia, an effort made possible by a change to their creative process. The band rented a house on idyllic Stony Lake away from all the distractions and hammered out the album. As Currie puts it “We worked hard, but we also made sure to keep it loose and have ourselves a good time.”

Newcomers Rusty Matyas and Ewan’s brother Shamus Currie, on guitar and keys respectively, bring a new spirit to the wistful back porch vibes of “Same Old Feeling” or the brooding melancholy of “Jim Gordon.” In late 2015, award-winning blues guitarist and the pride of Baileboro, Ontario, Jimmy Bowskill joined the band in advance of the European leg of their Future Nostalgia Tour, playing guitar and pedal steel.

From cramped Saskatchewan jam spaces, to magazine covers, to gold and platinum records, The Sheepdogs haven’t strayed from their goal of sharing pure, passionate rock n’ roll with anyone who’ll listen.