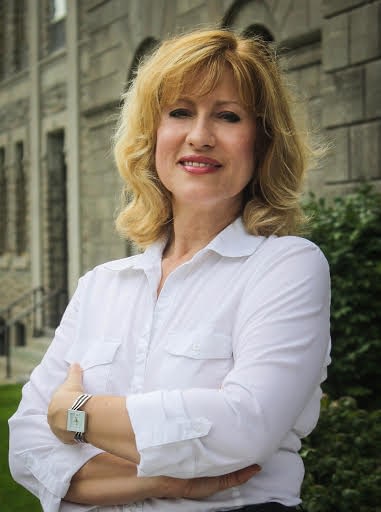 As the Seaway Valley’s Queen of Crime, Maggie Wheeler has spent over 15 years showcasing the social, cultural and psychological impact of the St. Lawrence Seaway and Power Project on Canadians affected. She is the author of the best-selling “Lost Villages” historical murder mystery series, which has garnered a nomination for the Ontario Premier’s Awards for the Arts, an Ontario Provincial Hansard, and the “people’s choice” Seeker’s Award for Literary Artist of the Year 2013. The series has been used to teach English and history from intermediate to post-secondary levels in Eastern Ontario and Upper New York State. In January of 2017, Maggie was named Ottawa’s Favourite Author (female) by FACES Magazine.

The BHC Peterborough connection, for Wheeler, is personal. Her late grandmother was a Barnardo girl, one of the over 9000 British Home Children who arrived in Canada to Hazelbrae, the former Dr. Barnardo’s receiving house in Peterborough. From 1869 to 1939, 100,000 orphaned or destitute children emigrated from the British Isles to Canada to start new lives as domestic workers.

“My family really started digging into the BHC history about three years ago,” explains Wheeler, “because, as with most BHC descendants, we knew next to nothing about it or my grandmother’s history. It’s been a journey. I wanted to explore and showcase the history through my writing. Happily, I was able to make it part of my Lost Villages mystery series. Two summers ago,” she adds, “I made the trip to Peterborough, and Ivy Sucee gave our group a wonderful ‘Barnardo’ tour. The information was priceless.”

Peterborough Barnardo historian Ivy Sucee is part of the Hazelbrae Barnardo Home Memorial Group—the committee who created the first BHC monument in Canada that now resides at the former Queen Alexandra School in Peterborough. The committee also hosts the annual BHC event each year, as Ontario British Home Child Day September 28th became official in 2011. There is currently a proposal under consideration in Parliament to make the BHC Day a federal event.

“The committee is thrilled to have Maggie be our special guest this year,” says Sucee. “We look forward to hearing her speak about her research and the new mystery that showcases the BHC history. Maggie has become another valuable voice in the growing interest in the story of the British Home Children.”

Wheeler says the Canada Council for the Arts supplied a grant for her writing and research, including a trip to England last year to visit the Barnardo Archive and the remains of the Barnardo Girls Village where most of the Hazelbrae residents came from. The author says the Council’s generous support is part of the increased awareness at the federal level for this part of our nation’s history.

“This year, Canada marks 150 years of nationhood,” says Wheeler. “The 100,000 British Home Children who came to Canada and the over 5 million Canadians who are their descendants are definitely part of that story.”

The Sixth Annual Ontario BHC event will be held September 23rd at the Northminster United Church, 300 Sunset Boulevard in Peterborough, starting at 1:00 p.m.