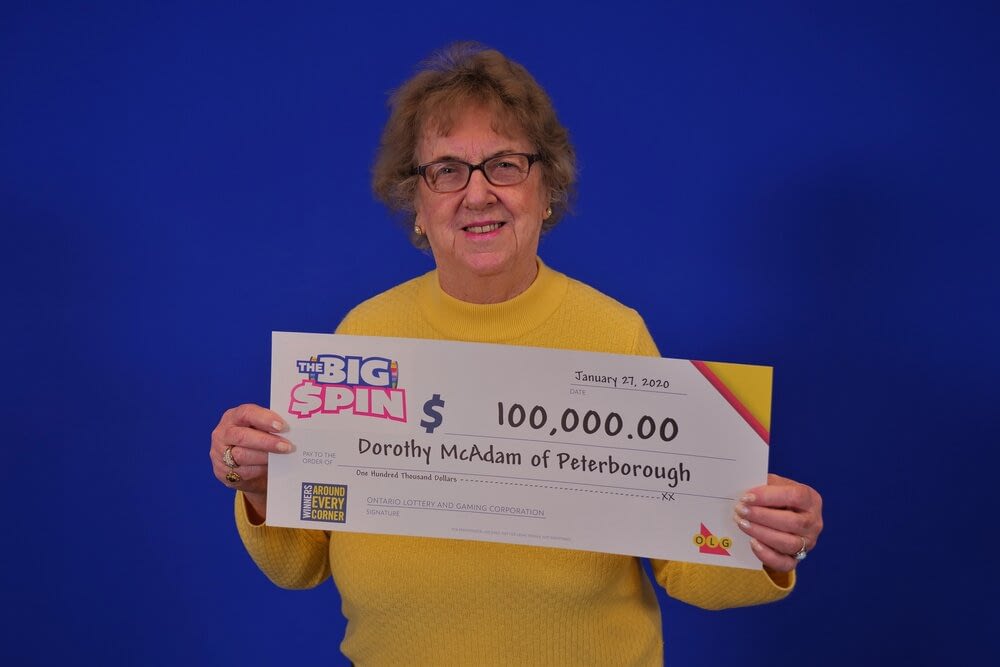 Congratulations to Dorothy McAdam of Peterborough for winning $100,000 with THE BIG SPIN INSTANT game (Game #3101).

“It was a shock,” shared Dorothy, a 75-year old retired widow, while at the OLG Prize Center in Toronto to pick up her cheque. “I was in disbelief. I couldn’t wait to call my sisters and share the good news!”

Dorothy plans to pay off some bills and purchase new glasses and boots. “I look forward to celebrating over dinner with all my sisters,” she smiled.

“This is amazing and still feels unreal,” Dorothy concluded.

THE BIG SPIN INSTANT game is an exciting $5 game that combines popular scratch play with prizes revealed in-store by an animated spinning wheel on the lottery terminal screen and potentially, an in-person spin on THE BIG SPIN Wheel at the OLG Prize Centre in Toronto.

2. WATCH – If the prize won is SPIN, visit any OLG retail location to validate the ticket and watch the animated wheel spin on the lottery terminal screen. Every “SPIN” is a guaranteed win! SPIN prizes range from $10 to $10,000 or a BIG SPIN.

The winning ticket was purchased at Circle K on Highway 7 East in Peterborough.