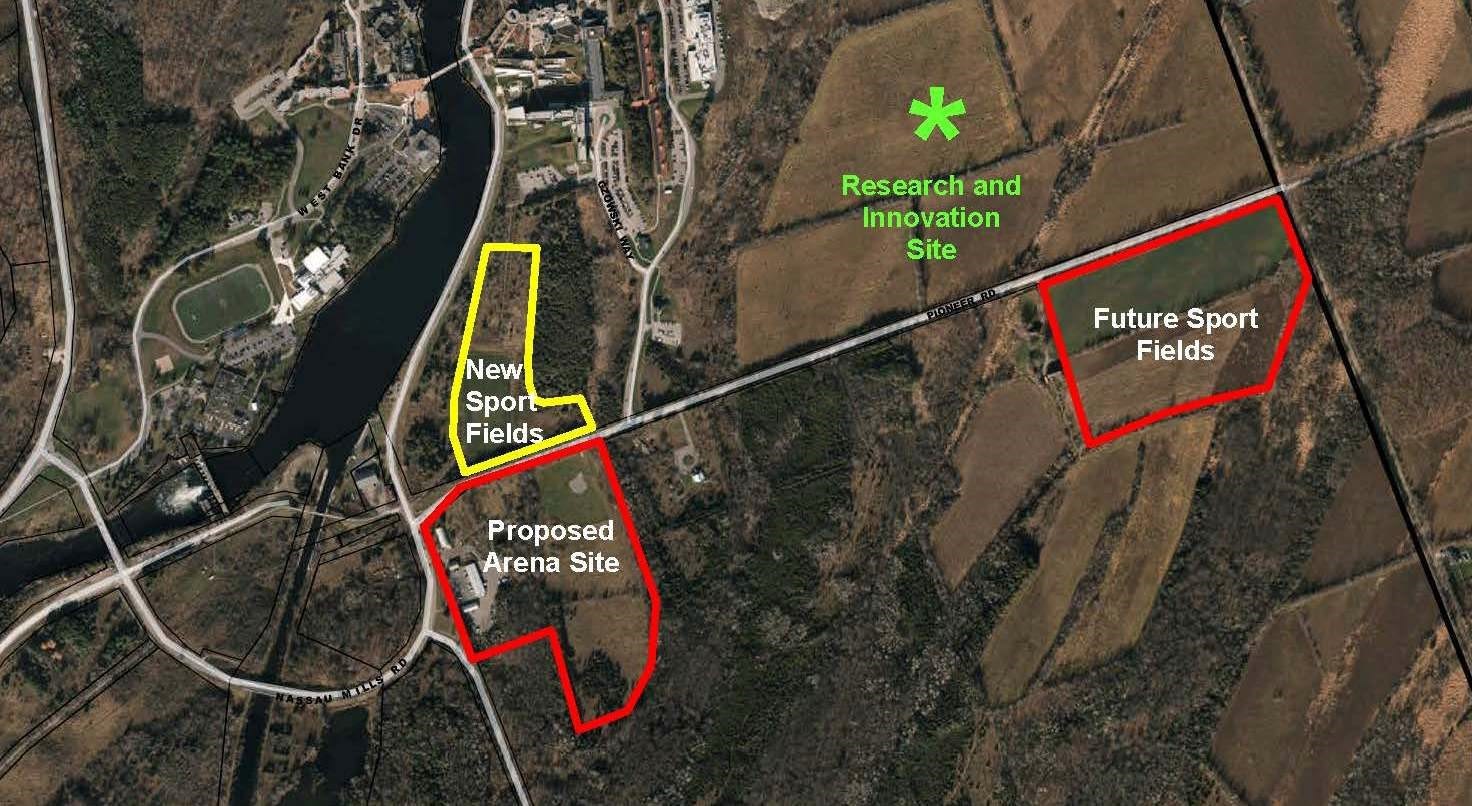 That Council approves the recommendations outlined in Report CSD15-019 dated June 29, 2015, of the Director of Community Services, as follows:

Approval of recommendation c) will commit Council to providing up to $2.5 million to service the east bank of the University campus based on the preliminary servicing study. Currently, there is an $800,000 balance in the approved innovation cluster infrastructure budget (2015 capital Project # 7-3.01). An additional commitment of an estimated $1.7 million is required from the City and other sources.

The 2015 new arena capital budget (Project Reference #6-6.03) has an allocation ofn $500,000 which can be used for a schematic design and environmental assessment of the arena project, upon Council’s approval in fall 2015.

Council previously approved CSD15-004 dated April 20, 2015 that identified Fleming College and Trent University as two potential partners for a site for the replacement facility for Northcrest Arena. A team composed of staff from Community Services, Corporate and Financial Services, Planning and Legal met with the two institutions to seek their best offers for this project.

Trent University’s Board of Governors has approved a deed of land transfer of approximately 22-24 acres to the City at Nassau Mills and Pioneer Road for this initiative (see Appendix A for site). The site offered for the arena currently holds a modest MNR storage building, the University’s Quonset hut and a ball diamond. The University is prepared to relocate these features to some other location on the campus, at their expense.

The University is further committing to reserve an additional 23 acres for an initial term of 15 years to the City for future consideration at Pioneer Road and 9th Line. This secondary site is provided for recreational field development. It could accommodate a number of outdoor sport fields and, as an example, the relocation of ball fields at Morrow Park should the Morrow grounds be altered in future for another purpose. If the City has not developed the property in the initial 15 years, the University and the City will meet to determine if an additional term will be entered into by the parties.

In addition to the University transferring land to the City at no cost, they have agreed to contribute a maximum of $2.0 million to the servicing costs for the east bank endowment lands on Pioneer Road which will benefit the new arena complex. The University is anticipating the City and other parties will fund the balance of costs.

In consideration of this, the University is requesting the following conditions of the City:

Discussions with Fleming College covered the same basic requirements as with the University. The College is more in favour of the Fleming north site, which City staff also support. Staff believes the south site should be ruled out as it will be too expensive to service (at $1.7 million), the grades are more challenging in this site and it is in another municipality. However, the Fleming north site is smaller. At 13 acres, it will only support room for a third ice pad addition in future and no other expansion possibilities.

An agreement with the College would be the same as the University with respect to approval on the exterior facade, maintenance, sponsorship review, etc. However, the College is not able to deed the land to the City.

There are several key elements to the University offer that make it very attractive. The first is the institution’s offer to transfer the arena lands to the City at no cost. This means that the City will not have to enter into a time specific, long-term lease with the University for the property but will own the land on which the arena will be constructed.

The second key element is the size of the site. It will support additional phased expansion by the City over the next 20 years as community needs are identified. From the beginning of this project, the City has been attempting to ensure this project is on land that has room to expand to become a community recreation complex, not just a twin-pad.

Additionally, the site is also in the northern section of the City that will replace Northcrest Arena. Although not essential, this will address resident requests that the arena be located in that quadrant of the City.

Due to the size and location of the property and the offer to transfer the land, Staff are recommending that Trent be approved for the new arena development site.

The City engaged D.M. Wills Limited to investigate the cost to upgrade utility servicing to the east bank of the University, which will benefit both the arena development and the research and innovation park. A report was produced that estimated the costs of the local utility servicing at $4.5 million in 2015 dollars. Upon completion of this work, the arena site at Pioneer and Nassau Mills Roads and the Trent Research and Innovation Park will have sufficient water, sanitary and electrical services to draw from the road.

Servicing costs were reflected in the 2015 capital budget in Project # 7-3.01 (Innovation Cluster – Infrastructure).    The University is prepared to provide $2.0 million for the servicing costs and requests City financing of the balance of costs. The balance of costs is required in the 2016 capital budget and will be determined in the next few months. The servicing design work will take place this fall while the construction of servicing would start in 2016.

In terms of a City commitment, additional upgrades of the local transportation network and possibly downstream sewer network improvements may be required in future as each development progresses.

The location of the arena establishes it in a site with other sport assets. A new baseball diamond and soccer/rugby field (see Attachment 1), which will be under construction this summer and fall, should be ready for play in 2016. Additionally, the identification of 23 acres of future lands on Pioneer Road and 9th Line, which will be reserved for future sport fields, will transform Pioneer Road into a sport and recreational corridor.

Staff are in the final phase of a capital and operating plan for the new facility. With Council approval of the site, the plan will be adjusted to reflect the facility location.

A report with these details will be presented to Committee of the Whole on August 31, 2015.

In Report CSD15-004, Council supported construction of a twin pad arena, off-ice training centre, multipurpose space, administrative space, community office and commercial space and an elevated running track. Details on an aquatic centre with competitive pool (8-lanes 25-metres) will be analyzed as part of the report and Council can determine if it supports the aquatic centre in the first phase of construction.

Following a decision by Council at its meeting on September 8, 2015, Staff would then undertake hiring a prime consultant to initiate a concept design program for the Trent site. The Prime Consultant work will be priced in three stages:

Stage 1 will proceed upon approval of the August 31 Committee of the Whole report. When complete, the design will be presented to Council. Stage 1 work would position the project to a point that would make it eligible for infrastructure funding (“shovel ready”). Infrastructure funding from senior governments will be a key component to financing the new arena project. Staff would not tender the project until Council has approved both the plan and the capital resources to construct.

The funding to start Stage 1 is contained in the 2015 approved capital budget for the new arena (Project Reference #6-6.03)

Upon approval of the Staff recommendations in this report, City Staff would then:

Choosing Trent as a site to construct a replacement facility for Northcrest Arena is a key step forward for the project and coincides nicely with other developments on the east bank of Trent University. These developments will be beneficial to the community from an employment and recreational standpoint.